I wrote this press release in 2009, when the University of Birmingham  announced a special educational initiative for India by opening its first overseas office in the heart of New Delhi.

The University of Birmingham has announced a special educational initiative for India by opening its first overseas office in the heart of New Delhi.

The announcement was made at a specially organised event in New Delhi, attended by Sir Richard Stagg, the British High Commissioner to India, leading academics and dignitaries from leading businesses and distinguished alumni of the University of Birmingham in India.

The Office in New Delhi has been established to maintain partnerships with local providers, support the alumni in India, further consolidate research collaboration and provide local services to those students who want to study at the University.

Founded in 1900, the University is now one of the world’s leading universities for the quality of teaching and research. Birmingham was England's first civic university, where students from all religions and backgrounds were accepted on an equal basis.

The University welcomed the first students from India to their Edgbaston Campus in 1909.
Professor David Eastwood, Vice-Chancellor of the University commented, “We have come a long way in developing international relations and are proud that India is the first country that we will have a permanent office presence.

Birmingham is passionate about working with the Indian education sector and the opportunities the new office will present. Despite the challenging economic times we are facing, India is experiencing its own golden era of change and so we are even more excited by the possibilities of working together at this special time.”

Birmingham has a number of research collaborations with several institutions across India that are helping to transform lives and to make a real impact on society.  The University’s International Development Department has partnered with the Jawaharlal Nehru University in New Delhi and the Indian Institute of Dalit Studies to look at how faith communities and faith based organisations have engaged with post-conflict situations in Mumbai and Ahmedabadd.

The University’s Automotive Safety Centre is working with IIT Delhi to explore ways of reducing road traffic accidents in India. The centre has more than 40 years’ experience in traffic accident investigation and analysis and is particularly strong in the study of passenger car collisions.

Professor David Eastwood adds: “We are privileged to be based in one of the UK’s most ethnically diverse cities with a large population from the Indian sub-continent. This puts us in a unique position to tackle problems like obesity or  Hepatitis C that not only affect our city, but also have global consequences. For example, the University is carrying out the UK’s largest study into heart failure in ethnic minority populations, involving more than 1,000 members of the Indian community in the city of Birmingham.

The lessons we will learn from this work can be applied across the UK, but also potentially in India. We hope our new presence here will enhance opportunities for research collaborations in areas like health, energy, transport and the economy.”
Posted by anietiewrites at 06:11 1 comment:

I realized recently that the most of my press releases, written a couple of years ago have disappeared from the web! Very disheartening. So I have decided to post the few I have been able to find. Watch out for these!
Posted by anietiewrites at 05:57 No comments:

Lev Manovich’s  The Language of New Media was one of the first books I read on the concept of new media. Published in 2002, the book offered the first systematic and rigorous theory of new media. More than a decade later, many more books on the subject have appeared. These latest publications highlight the digital ethnography of the social media – from Facebook to Twitter.

As a researcher on African culture and technology, I am particularly interested in the role of Twitter in fostering change in Africa. And so, during Africapitalism Institute’s inaugural board meeting/panel discussion, on January 7, I looked forward to seeing how new media could also complement discussions around Africapitalism – a term coined by Tony Elumelu. It was a mixed multitude at the event. There were diplomats and journalists – plenty of them. Plus politicians too. I spotted Kayode Fayemi, former governor of Ekiti State.

When the online discussions kicked off, I was over the moon. Journalist Tolu Ogunlesi tweeted: “Attending @AfricapInst panel discussion in Abuja. Distinguished panel, speaking on 'Local Value Creation In #Africa'” – a first in a serious of tweets. Arunma Oteh, DG Securities and Exchange Comission tweeted too. And, of course, the Africapitalism Institute itself was disgorging  tweets as Zain Verjee, moderated the panel session. People asked questions too, on Twitter. Professor Calestous asked: “What can be done to strengthen links between entrepreneurship and engineering?”

More about the Institute here
Posted by anietiewrites at 09:04 No comments:

In the summer of 2000, I graduated from the University of Ibadan with a BA degree in Communication and Language Arts. My final year thesis was on Nollywood. I was excited about Nigeria’s emerging movie industry. During my research, I annoyed respondents with many probing questions. I interviewed movie practitioners and government representatives, including a senior officer with the Nigerian Copyright Commission. Today I am pleased that much more comprehensive research have been carried out on the film industry. Academic essays and texts on Nollywood are now flourishing. A few weeks ago, I met a PhD student from France. She was in Lagos to collect data on Nollywood.


This month, Nigerian movie practitioners celebrate 20 years of Nollywood. How did Nollywood come from behind to become the world’s second largest producer of films? I was in secondary school when Living in Bondage - a movie touted to have kicked off Nollywood - was produced. The film was in the Igbo language and it wasn’t even subtitled. But everyone was talking about it. Everyone was watching it. I watched it too, though I didn’t understand the language.

Twenty years is a long time. In Nollywood, a lot has happened.

In the beginning, movies were shot, recorded and sold directly on the streets – to vendors and video clubs, bookshops, supermarkets and churches. Today cinemas have sprouted all over Nigeria. Silverbird Cinemas for instance has branches in major cities, including Abuja and Port Harcourt. So do Genesis Cinema and Filmhouse. Nigerian home videos are screened alongside American blockbusters. A few years ago, the idea of screening Nigerian movies in the cinema was inconceivable.

Movie premieres at cinemas are now becoming standard practice in Nollywood. During the Easter holidays, my sister Emem Isong, alongside her friends Monalisa Chinda and In Edo premiered their latest movie – ‘Weekend Gateaway’ in Victoria Island, Lagos. I was there. Friends and colleagues came out in grand style. Monalisa arrived in a limousine. At the red carpet, the stars strutted and posed as a thousand flashlights flushed their faces.

Nollywood fans who cannot go to the cinema can watch their favourite movies on DSTV – the monopolistic multi-channel digital satellite TV service in Africa. DSTV has at least four ‘Africa Magic’ channels devoted to showing Nollywood movies. The stations are not free, but are among the most watched satelite channels on the continent. That is why some practitioners grumble about the paltry royalties they get from Africa Magic. But truth be told: DSTV has done a lot of good for Nollywood. I know movie practitioners who make movies just to sell to Africa Magic. And this year, the AfricaMagic Viewers' Choice Awards took place in Lagos to celebrate actors from all over Africa. I watched the ceremony in the comfort of my living room. In my opinion, it was one of the best award ceremonies ever held in Africa.

When Nollywood started, it was made up of mostly Nigerian trained theatre artistes. Over the last few years, many budding artistes have gone abroad to study the art of filmmaking. Some have gone to study at the New York Film Academy. I am on the board of Royal Arts Academy – a film school in Lagos. My sister Uduak Oguamanam who is the academic director of the school tells me they receive countless applications every session. She goes through every single application and is amazed by the determination of the budding actors to broaden their knowledge. Ocassionaly, she gets imperfect applications from people who cannot even spell their names correctly.

Nollywood has not been perfect. I have seen sloppy storylines and mediocre acting. I have seen poor directing and poor production. But I am an optimist. I believe Nollywood will get better. This is an industry that started with nothing. No big investors. No government support.

I salute the men and women who remain committed to the industry. Like my sisters Emem and Uduak. I salute the departed who left too soon. Like my friend, brother and mentor Francis Agu.

Twenty years is a long time. Nollywood will get better
Posted by anietiewrites at 04:25 No comments:

Where have I been?

I have been away for so long ... but I am back now.
Posted by anietiewrites at 04:06 No comments:

My short story, 'Devotion' has been reviewed in the Independent. More here.
Posted by anietiewrites at 01:35 5 comments:

My short story 'Devotion' is published in an anthology of short stories, Roads Ahead edited by Catherine O'Flynn. It is available to buy here.

There's also a review of the book here.

In 1999 a spiky collection of young writing was put together by the Tindal Street imprint, the first on a prize-winning road ahead. Receiving critical acclaim for its energy and variety, and awarded an Arts Council publishing prize, Hard Shoulder kick-started the careers of many young writers, editors and publishers. Ten years on, Tindall Street Press celebrates a decade of publishing – and commitment to the short story and wealth of regional writing talent with Roads Ahead.
Posted by anietiewrites at 01:47 No comments: 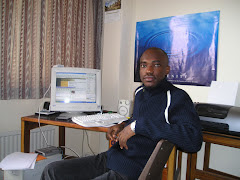 anietiewrites
Anietie is a creative writer, journalist and public relations practitioner. Currently a PhD student at the Institute of Creative Technologies (IOCT).